Latest data from the Purchasing Managers’ Indices (PMI) surveys indicated that the conditions in the UK manufacturing sector are on an upward curve as they continued to improve at the end of the third quarter.
With a long term average of 51.5 (2004-2016), it is very pleasing to see a further rise from 53.4 this August to 55.4 in September. This is a positive rebound following a slight slump immediately after Britain voted to leave the EU. 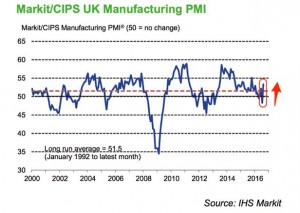 The purchasing managers index (PMI) figures from IHS Markit are given as a number between 0 and 100. Anything above 50 signals growth, while anything below means a contraction in activity — so the higher the number is, the better things look for the UK.

Since Brexit we are continuing to see improvements throughout various sources of data such as the PMI figures which in turn build a greater confidence in the UK market. There are a number of factors which may be contributing;

Although Brexit brought a great deal of uncertainty about how business’ in Britain would fair, there is nothing more promising than a rise in PMI to provide a further positive contribution to GDP in the third quarter.