Opened in August 2017, Transport Scotland’s Queensferry Crossing is both the UK’s tallest bridge and the world’s longest three-tower, cable-stayed bridge.

As the SSDA awards celebrate their 50th year of recognising the best of what the UK steel construction industry can achieve, we celebrate that 77% of the projects feature STRUMIS customers. In this post we will be celebrating Cleveland Bridge UK Ltd.’s involvement in the Queensferry Crossing project. 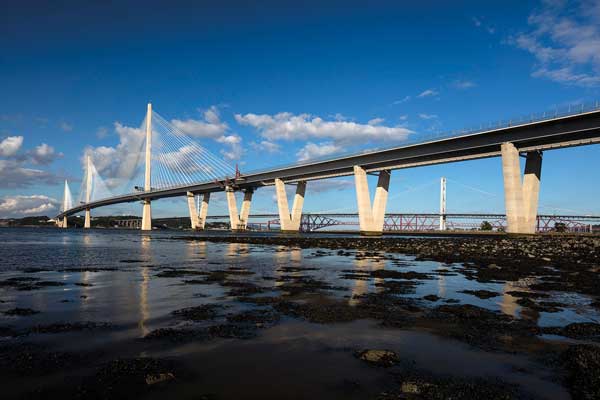 Linking Edinburgh with Fife, the new Crossing stands proud in a unique bridgescape, alongside its illustrious neighbours, the Forth Bridge and Forth Road Bridge (FRB).

The bridge is strategically vital to Scotland. It was commissioned following revelations of potential structural compromises to the aging FRB, which were uneconomical to repair. The FRB was susceptible to weather-related closures, with a huge impact across the region.

On the south side of the crossing the approach viaduct is 545m long, consisting of twin parallel continuous composite decks with steel box sections, supported on six V-shaped piers.

Steel offered the strength, lightness, versatility, durability and speed, making it an environmentally sustainable solution. Its lightness allowed a delivery solution that minimised any damaging impact on the estuary banks.

“With steep terrain making way for mud flats and shallow water on the south approach, a launched steel viaduct solution offered a number of environmental benefits, allowing us to minimise reliance on marine plant and negate the need for dredging or temporary causeways that would harm the environment,” explains Ramboll Director Steve Thompson.

The viaduct was pre-assembled before being progressively launched into place, following the design philosophy for the entire Crossing; completing complex assembly offsite. Assembly took place in an efficient and controlled environment, keeping work out on the estuary to a minimum.

The steel twin box girders of the viaduct were fabricated and pre-assembled by Cleveland Bridge. The completed girders were transported by road in halves due to the width of the boxes.

To read the full article visit the NSC website https://bit.ly/2zCW1kZ